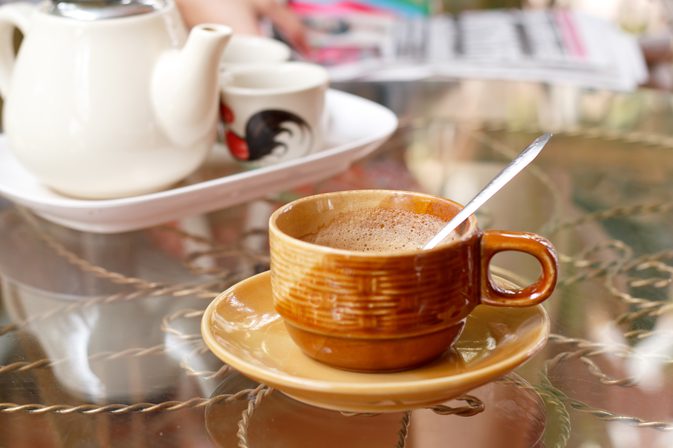 Caffeine helps you wake up because it increases the neurotransmitters norepinephrine in the brain. Increased levels of norepinephrine make you become more alert and awake. Caffeine produces the same physiological response in the body as if you were stressed. Caffeine consumption increases the amount of activity in the sympathetic nervous system that releases adrenaline. This is the same physiological response you would get on a stressful commute to work. Caffeine consumption also minimizes the amount of Thiamine (Vitamin B1) in the body. Thiamine is a known anti-stress vitamin because it metabolizes cortisol (stress hormones) in the body (Bourne, 2000). The less Thiamine to eliminate high cortisol levels in the body, the more stressed you will become.

So how do you know when you’ve had too much caffeine? According to the Diagnostic and Statistical Manual of Mental Disorders (DSM-V) Caffeine Intoxication is a diagnosable mental health condition. The DSM-V’s criteria for caffeine intoxication is defined as anyone who consumes more than 250mg of caffeine a day (Association, 2013). After just two cups of drip coffee you already meet the criteria for caffeine intoxication. Any of you who don’t suffer from anxiety problems on average could safely consume less than 100mg of caffeine a day without having to worry about caffeine dependence. For those of you with problematic anxiety it’s best to consume 0mg of caffeine a day, so that your baseline anxiety isn’t triggered by anxiety-inducing substances. Life is hard enough, why make an already difficult situation even worse by consuming too much caffeine?

To calculate your total caffeine intake, multiply the number of consumed caffeinated beverages by the indicated average caffeine levels listed below. If you experience any caffeine intoxication symptoms compare your average caffeine intake to at least 250mg to gauge the level of caffeine you consume daily. Remember that one cup equals 8oz. Just because you’re consuming one large cup of coffee doesn’t mean it only counts as one serving! Caffeine can also be found in many sources other than coffee. The average cup of tea depending on the color and the amount of time steeped contains roughly under 40mg of caffeine per 8oz serving (Bourne, 2000). Even cocoa has about 13mg of caffeine per serving (Bourne, 2000). Energy drinks typically have very high caffeine levels and should be monitored as well.

The average milligrams of caffeine in an 8oz cup of coffee:

If you meet the criteria for caffeine intoxication there are many ways you can reduce your caffeine levels. High doses (especially doses meeting the criteria for caffeine intoxication) make you much more susceptible to caffeine withdrawal symptoms such as headache, fatigue, depressed or irritable mood, difficulty concentrating and muscle stiffness (Association, 2013). If you have these symptoms when you stop caffeine consumption, it’s a sign that you’ve developed a caffeine dependence. To eliminate caffeine dependence slowly cut down on your caffeine intake to gradually reduce your withdrawal symptoms. For best results try removing one caffeinated beverage a month (Bourne, 2000). For example if you consume five cups of coffee a day try reducing it to four cups every day for a month, then down to three cups every day for the following month. Continue this until you’re under 100mg a day, or preferably at 0mg. See how your baseline anxiety feels once all caffeine is eliminated from your body. In so doing you can ascertain how much of what you’re feeling is actually anxiety, and not just the caffeinated beverages you’ve been consuming on the regular.

Bjarnadottir, A. (2017, June 3). How Much Caffeine in a Cup of Coffee? A Detailed Guide. Retrieved May 22, 2018, from https://www.healthline.com/nutrition/how-much-caffeine-in-coffee

Kallmyer, T., & Foster, J. (n.d.). Caffeine Amounts in Soda: Every Kind of Cola You Can Think Of. Retrieved May 22, 2018, from https://www.caffeineinformer.com/caffeine-amounts-in-soda-every-kind-of-cola-you-can-think-of