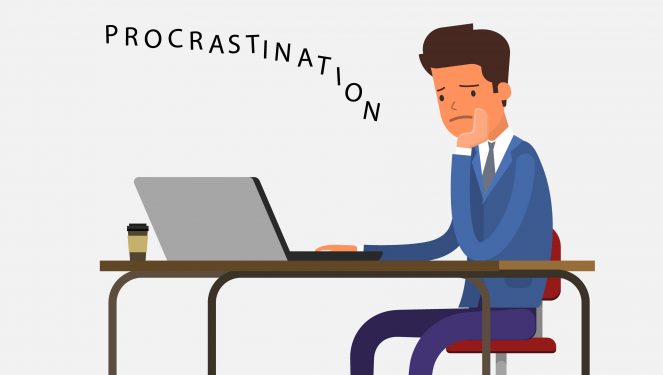 Procrastination is something everybody does. In order to determine if it’s helpful or not is to assess the degree to which you procrastinate. It’s unrealistic to expect that you work optimally all of the time, and advantageous to sometimes delay tasks (even important ones) as part of self-care. However, when you end up getting into the habit of prioritizing the short-term gratification over the long-term benefits is when you start running into problems. Procrastination is a consistent pattern of avoiding the completion of a task that is uncomfortable and or frustrating for you. The benefit of procrastination is the delayed discomfort. The consequence of procrastination is not completing required tasks that help you achieve your goals.

Procrastination happens most often in response to irrational beliefs; many of which aren’t always in your awareness. In Rational Emotive Behavior Therapy (REBT) there are four groups of irrational beliefs that fuel any type of emotional or behavioral disturbance. In the case of procrastination, low frustration tolerance (LFT) is most commonly associated with procrastination. LFT is a group of irrational beliefs that surmise you only have a fixed amount of pain or discomfort that you can tolerate. When you have LFT you might tell yourself statements such as “it’s too difficult,” “it’s too tough,” “it’s too hard,” “I can’t stand it,” “it’s intolerable,” “I can’t put up with it,” etc. Dr. Albert Ellis (the founder of REBT) referred LFT to having a case of “I-can’t-stand-it-itis.” When you tell yourself there’s only so much frustration you can cope with, you start believing it’s true. As a result you begin avoiding things you think you can’t handle. Procrastination in a nutshell is LFT to discomfort.

The more you tell yourself rational counter-statements like “I can stand this,” “It’s not too much for me, just a pain in the butt,” “I can cope with this,” “it’s not intolerable, it’s just frustrating,” the more likely you are to confront the discomfort and work through it. When you continue to face the discomfort you provide yourself with more evidence that the task is not too much for you, because you just did it. You’re ability to cope is not finite. It’s also important to remind yourself of how it’s in your best interest to confront the discomfort of the task you want to accomplish. Visualize yourself having just completed the difficult task. How would you feel after it’s finished? These visualizations can be equally as powerful as thought-changing, and can elicit more positive emotional experiences that motivate you. Always remember that it takes just as much energy to talk yourself out of what you want as much as it takes to talk yourself into it.